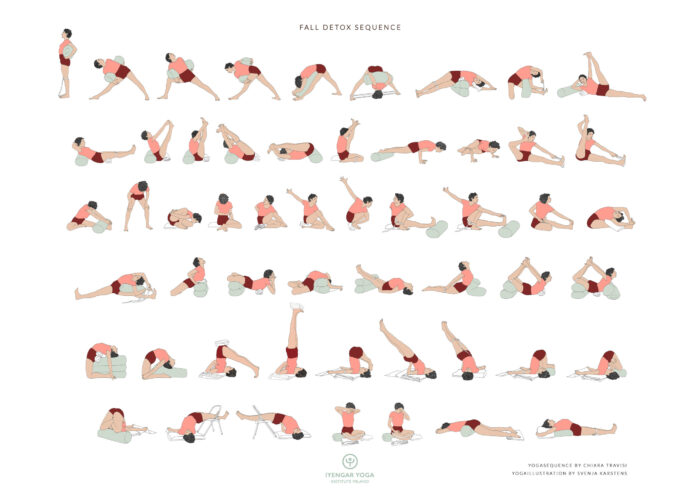 written by Chiara Travisi and illustrated by Svenja Karstens

The first part of the sequence is composed by standing asanas.
In the variations of standing asanas that Chiara propose here, the bolster is employed in order to massage the kidneys, adrenals and posterior diaphragmatic area, while creating length and wideness in the stomach, liver and front diaphragmatic region.
The lateral extensions in Parighasana and Anantasana work on softening the intercostals muscles creating more freedom in the diaphragm movements.

The second part of the sequence is composed by abdominal asanas. By tonifying the abdominal wall and core of the body, they contribute to draw blood to that region and ameliorate the blood supply to the abdominal organs. Haṁsasana creates a direct compression on the abdominal aorta that stimulates the affected organs. After having worked on the front region, the practice of Akarna Dhanurasana activate the posterior lumbar area.
Mahāmudrā and standing Uddhyana Bandha are particularly relevant since they have an impact on the whole length and width, front and back of the abdominal/lumbar area: from the uterus and prostate up to the stomach, as well as on kidneys and adrenals.

The third part is focused on twisting asanas.
Open twistings such as Bharadvajasana create movement in the kidney/adrenals and stomach areas, while closed twistings such as Marichyasana and Pasasana massage and tonify the lower tract of the digestive system, urinatory and excretory systems in particular.
After toning with abdominal and twisting poses, the lateral extension in combination with twisting in Parivrtta Upavistha Konasana and Parivrtta Paschimottanasana allow to work on the upper and lower part of the digestive tract, respectively, creating a release. The bolster and blanket in particular give a soft support to breath against while maintaining the pose.

The fourth part of the practice employs back extensions.
Here the expected beneficial effect of back extensions is to help stimulate the kidneys and adrenals glands while extending the digestive system.
Thanks to the Padmasana positioning of the legs, the two variations of Simhasana allow to reach and extend the lower part of the abdomen. A rolled blanket underneath the abdominal aorta area stimulates circulation. The belt tightened at the legs creates an elongation in particular in the middle longitudinal part of that is usually difficult to reach.
Supported Ustrasana and Laghyu Vajarasana emphasize the abdominal extension even more. Supports help to stay in the pose in a quiet and un-contracted state.

The fifth part of the sequence is a combination of several inversions.
Chiara propose to practice Halasana and Salamba Sarvangasana with weights because such variation requires to forcefully push the femurs upward, thus creating a spontaneous Uddhyanakrya in the abdomen. With an uddhyanic positioning of the abdominal cavity, the organs retract back and find their own space.
Different variations of Sarvangasana with lateral extensions and knottings, such as in Pindasana, are employed to stimulate the elimination of extracellular fluid and boost gut’s peristalsis.

Finally, the sequence ends with Prāṇāyāma.
Slow and deep breathing itself has a calming effect on the mind, helps individuals relax, and can also have profound physiological effects on the lung, cardiovascular, and mental functions of the brain.
Chiara suggests the practice of bhramarī and nāḍī shodana Prāṇāyāma.
The sound produced during brahmari pranayama (the buzzing bee breath) relaxes the nervous system and brain cells by stimulating parasympathetic activation.
Nadishodana Prāṇāyāma purifies the energetic channels of the body. The perceived effect of this Prāṇāyāma technique is to balance the sympathetic and parasympathetic nervous systems.